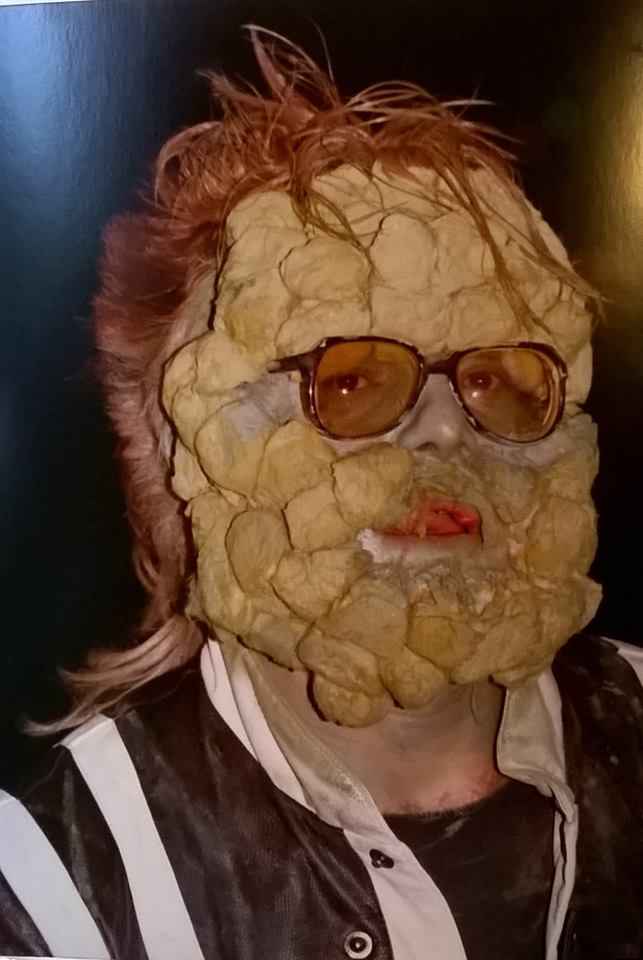 I love my Power Smokeless Grill and want to show you how I been using it in my basement apartment kitchen.

For the last two years, I have been living in a small one-bedroom basement apartment that before I moved in was an unfinished basement. The landlord and I turned the single-family, one-story house into an upper/lower duplex. So I have my own kitchen, bathroom and the rest, but the gas stove/oven unit is tiny and the kitchen sink a single basin type, no dishwasher.

Instead of cabinets and counters, I have the restaurant type stainless steel 4'x2' tables that have the means to support a shelf underneath, which is where I store a lot of my pots and cooking equipment.

When it was quick and easy to get to, using an outdoor gas grill was something that I did often, but once my kitchen was in the basement, it was a real hassle to use an outdoor grill. So it got to the point that I was no longer grilling. It was right around then that I started to notice the internet ads for various indoor, smokeless grills.

So I decided to try a couple of them out to see if they are what they claim. The first one that I tried was the Gotham Smokeless Grill. https://gothamsmokeless.com/

They have "improved" this sucker since the time I bought one. The one that I bought was tiny! So the new larger ones have that improvement, however, I think the biggest problem with this unit is the fact that it does not have a lid, which is I think, essential for cooking on a device such as this.

Let's take a rack of ribs for an example. First only about a third of a rack would fit. With the curvature of the ribs, there were very little contact points of the ribs touching the grill. It took forever trying to cook the ribs and they were certainly not evenly cooked!

Having looked at their website, it seems that they are trying to copy the Power Smokeless Grill in some ways now. However, as long as there is no lid, it is not very useful in my personal opinion.

When I am trying to figure out what to buy I will sometimes purchase whatever it is at a brick and mortar place that has an easy return plan should I not like what I had bought. So, I bought the Gotham grill at the local Walmart, didn't like it and returned it. (I think I remember paying $49.99, plus tax for it.) By then I had already decided that I wanted to try the Power Smokeless Grill, so I bought one at the same Walmart when I returned the Gotham Grill.

By then I already knew that if I liked this unit, I would be returning it too! Why? Because the instore units are more expensive and did not include the griddle plate, which is an important feature of this unit. The online deal was and still is three monthly payments of only $29.99 and it includes the griddle plate. They now also offer a slightly larger unit with a higher wattage than the one I own.

I was really happy with this unit compared to the Gotham Grill and decided that I wanted this, but with the missing griddle, so I returned the Power Smokeless Grill to Walmart and went for the online deal from the manufacturer. The bummer was they were sold out and on backorder! It took nearly two months before mine was delivered. Fortunately, I was not charged any payments until the unit arrived.

The Power Smokeless Grill has become my main means of cooking and I sometimes now do not break out my sautĂ© pans for weeks on end. Once you learn the tricks to using one of these, you will find yourself using it for numerous meals. https://powersmokelessgrill.com/

For many of my meals, the only other two cooking units I might use too are a copper bottom pot for my Three Ladies brand of Jasmine rice and the trusty microwave.

(I'm going to have to write an article eventually on how to cook with a microwave because it seems that the vast majority of microwave oven users are absolutely clueless of how to properly cook with one.)

Another great thing about this indoor grill is how easy it is to clean after cooking something that had a thick sauce or marinade to it, which can create a good amount of char left behind, stuck to the grill plate. I do not have a dishwasher, so I am unable to tell you how well it gets clean that way.

I have learned that perhaps the easiest way to deal with a thick char is to first use your thumb, or maybe back end of a steak knife that is wooden or plastic to scrape off some of the char. Usually, my thumb will remove most of it. Then I will put the grill plate into the kitchen sink and cover the grill with a little Dawn soap and then fill the sink with just enough hot water to cover over the grill and let it soak for a while. Then I use a plastic steel wool-like scrubber which easily removes the rest of the char.

Warning! Never use steel wool or any metal against the surface of the grill and griddle plates! You could end up wearing off the first surface or coating of them.

Enough about the grill itself, let's do some grilling!

The first meal that I will show you was done using the griddle plate. It is a simple Asian meal consisting of turnip cake with Chinese sausage, an Asian pancake and of course, Three Ladies Jasmine rice.
https://www.vwasianfood.com/products/three-ladies-jasmine-rice-25-pound-bag

I've been using the Three Ladies brand of jasmine rice for nearly two decades now and I absolutely love it! Where I buy it is the Pacific Ocean Market on Alameda Avenue in Denver. This is one of my two most favorite places in Denver to do my food shopping! The amount of rice that they have stocked at any given time is amazing, literally tons and tons of it! I buy a 25-pound bag around twice a year. http://www.pacificoceanmarket.com/

So this was a simple meal, first making a sauce of Hoisin sauce, Orient Worchestershire sauce, Vietnamese smoke chili sauce, ginger, garlic, scallion, and cilantro. Usually, I have fresh basil and would add that in too.

I slice the turnip cake in about 1/4 inch thick slices. The pancakes come separated in paper sheets and so they are very easily separated while frozen. In the video, I might have said taro cake instead of turnip. Both are available at the store and they are almost identical in taste and texture. Mistakenly I also said that this was an onion pancake, which is the kind I usually buy but this was the plain version.

The next time I cook these two together again, I now know that I need to start the turnip or taro cake a few minutes before I put the pancake on the grill. If you get it grilled correctly, the pancake puffs up and gets some flakiness to it sort of like phyllo dough does.

I like to have a nice char on the turnip cake where it actually looks black in places. It is one of my more favorite Asian appetizers.

For the next Power Smokeless Grill review, I will be making a version of BBQ'd ribs in a homemade dry rub and later a grilled chicken breast with an ear of corn.

The camera used for this review is Lumix ZS-100 and all the still images excepting the Three Ladies bag of rice were extracted from the frames of the video. My Lumix ZS-100 uses a SanDisk Extreme 95 MB 10X 128 GB SD card. The still images were extracted via QuickTime Pro and exported into TIFFs. TIFFs were opened and developed with Luminar by Skylum https://Skylum.com