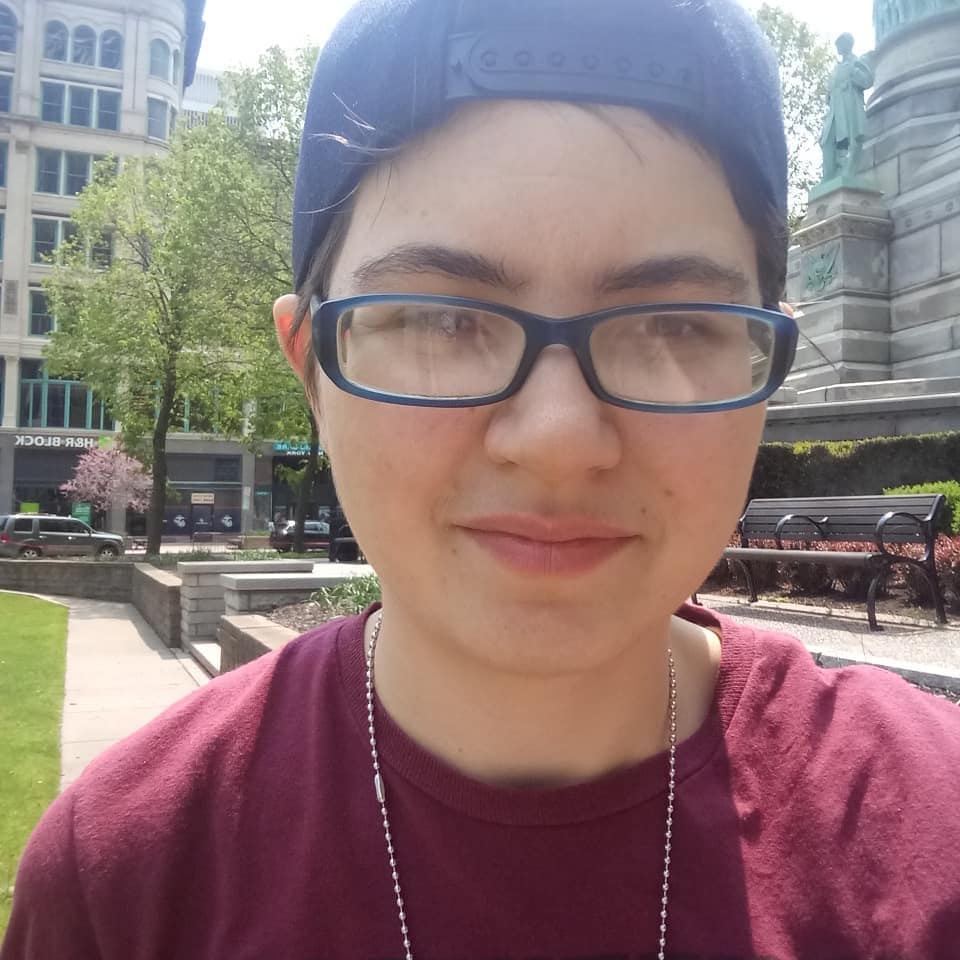 More cute fluffy relationship stuff I wrote forever ago, based off the song Black Butterflies and Deja Vu by The Maine sorta but still cute nonetheless

I LOSE MY VOICE WHEN I LOOK AT YOU

Kasen Grey stood in front of his bedroom mirror, sighing softly as he tried to desperately fix his brown messy hair. "Well there's only so much I can do, not like I'm impressing anyone," he thought to himself.

Suddenly a knock came on the door, followed by a voice, "Kasen? Are you still in here?"

Kasen fixed his hair and put back on his square black glasses, before opening his door. His green eyes widened in shock and he stumbled over his words, "Uh..R-Rose, what're you doing here?"

Rose gently punched his stomach as she stepped to the side and walked into his room. "We were supposed to hang out today at the mall, remember?"

Kasen gave a sheepish grin, blushing as he rubbed the back of his neck. "Oh right, I uhâ€¦"

"Ha yeah I guess I had my mind on other things," Kasen blushed as he walked over to his desk. He could feel Rose's blue eyes on him which made his heart beat like crazy. "So um..did you just get here?"

Rose chuckled at her best friend's nervousness, she thought it was too cute. "Well obviously. My butt ain't waiting forever for you to get ready. You spend fifteen minutes in front of the mirror to do your hair, like who are you? Jesse from Full House?" she teased as she stuck her tongue out at him.

Kasen got sheepish as his cheeks turned red before turning on his laptop quickly, trying his damndest to hide how red his face was. He cleared his throat as his fingers touched the keys on his laptop keyboard. And all the while, he could feel Rose's eyes watching him which made his palms sweaty. He cleared his throat, not keeping his eyes off his computer screen while he asked, "so is it just gonna be us? Or other people gonna be joining us?"

Rose smiled, knowing what he was really trying to ask but she knew Kasen better than that. He would never ask directly, he was too afraid to ask. So Rose got up and stood behind him, wrapping her arms around his neck with the biggest grin on her face.

"It's just gonna be us" she said in a low voice into his ear while she gently touched his chest in a flirting manner.

Kasen froze up when Rose touched his chest, his heart raced so fast he thought it was going to jump out of his chest. But his composure and cool were pretty much out the window at that point, could you really blame him? His best friend was hanging over him with her hands on his chest, she had never done that before...at least not that long.

"Oh um...that's uh...that's cool with me," Kasen finally found his voice as he turned around to face her.

Rose raised a curious eyebrow at him. "Are you okay Kasen? You seem a little nervous that it's just gonna be us."

Kasen cleared his throat and smoothed his hair back before standing up. He stood taller than Rose, she came up to his chest so she was staring up into his green eyes. Kasen tried to speak as he wrapped a strong arm around her waist, pulling her closer to his soccer built body but he found that he had lost his voice just by looking at her.

Rose just smiled at Kasen, her hands on his chest. "It's okay, you don't need to say anything Kasen. I know, I've known for a while actually."

Kasen looked at her with surprise as he stuttered," wait, y-you know?"

Rose giggled at her best friend as she nodded. "Come on Kasen, we've been best friends since we were fifteen. I know you better than you know yourself, so of course I've known. It wasn't that hard to figure it out."

Kasen rubbed the back of his neck, laughing awkwardly and felt embarrassed at the moment. "Yeah you're telling me and that's scary sometimes on how well you know me."

"Oh shut up, you know me too," Rose playfully pushed Kasen, almost knocking him on his feet.

Kasen caught his balance just in time, securing his arm back around Rose's waist and smiled shyly at her. "Trying to knock me on my feet?"

Rose bit her lip, looking up into Kasen's green eyes and getting lost in them. "No, not me, not at all."

Kasen raised an eyebrow, chuckling deeply as he picked her up over his shoulder which made her laugh and squeal.

"Kasen Grey! Put me down! You know how much I hate heights you jerk!" Rose yelled through her laughter as she struggled to get down.

"No way!" Kasen laughed as he spun her around before running out of his room and down the hall to the living room and dropped her on the couch.

They stared at each other for a while, not really saying anything for a minute or two after Rose had pulled Kasen on top of her.Their hearts were beating in sync and so loud, Kasen was sure he could hear Rose's heartbeat and that she could hear his. Their lips were so close to each other, just one more inch and their lips would be touching. This could be the moment where they finally kiss, Kasen could make his move...it was either now or never but he was too scared to make that move. Rose could tell that he was too nervous so she took the moment and decided to kiss Kasen fully on the lips. Kasen panicked for a split second before wrapping his arms tightly around her waist and kissed her back. They kissed for a couple of minutes before coming up for air with wide smiles on their faces.

"It's about damn time you kissed me," Rose laughed as she kissed him again.

"Ha yeah, sorry it's taken me like five years," Kasen apologized sheepishly and kissed her back, holding her close to him.

Rose smacked his chest lightly. "Chicken shit, what were you so afraid of?"

Kasen sat up, pulling her up with him and took his glasses off. "I was afraid you didn't feel the same, I was afraid I was going to ruin our friendship and I didn't want to lose you. You're my best friend Rose, you mean so much to me, I'd be lost without you by my side. You're everything, you've become my whole life. I've been about you, been crazy about you since we became friends freshman year in highschool. And I've always wanted to be more than that, I look at you and I see my future. I'm scared as hell, but as long as you're by my side I know everything's gonna be okay."

Rose started to tear up, shaking her head as she smiled stupidly at Kasen before throwing her arms around his neck and kissing him deeply. "You idiot, I love you. I've been in love with you since the day we met and I've always wanted to be more than just friends. I've just been waiting for you to say something and tell me you've felt the same."

Kasen laughed and gently touched the side of her face, kissing her back. "Hey better late than never."

"That's true," Rose agreed as she leaned on his shoulder.

They sat in silence, enjoying each other's company, knowing that this was the start of their life together.